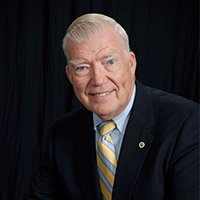 Jim Tepper joined New Direction Partners in 2012 following his retirement from Printing Industries of New England, an industry association delivering top management guidance and services for graphic communications firms. In his role as President of PINE, Jim provided considerable consulting and direction for many companies regarding growth, market positioning, acquisitions, and establishing and executing stockholder exit plans. He applies that experience and knowledge to his support and service of NDP clients now.

Prior to his tenure with PINE, Jim worked in management at the University of Massachusetts in the Continuing Education Division. He holds an MBA from the Eisenberg School of Management at U-Mass and a BA from Springfield College. He has served on numerous national boards and committees at GATF and the Printing Industries of America as well as at PINE.

Jim has served on the Board of Directors for his local Rotary Club, is the Treasurer of his church, and has served for 7 years on the Westboro Advisory Finance Committee. Jim continues to serve as the Treasurer of the Graphic Communications Scholarship Fund of New England.
A Retired Marine Corps helicopter pilot with combat tours in Vietnam, he continued serving and flying in the Marine Reserves for 25 years following active duty, retiring in 1997 as a Lt/Col. He is a member of the PIA Benjamin Franklin Society and has 2 sons/daughters-in-law, and 5 grandchildren. Jim resides in Westboro, MA.