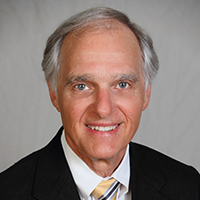 Randy Camp, a Director at New Direction Partners, has been involved in marketing and printing since graduating from the University of Georgia in 1969 with a degree in Journalism, beginning with a role in the Trade Research Department and Marketing Division of The Coca-Cola Company. Most recently, he served as the President and CEO of the Printing & Imaging Association of Georgia (PIAG), an affiliate of Printing Industries of America.

In 1972, Randy joined family-owned The Walton Tribune which became a web publication printing company, Walton Press, Inc., with the sale of the newspaper in 1976. He was CEO of Walton Press from 1980 until its sale in 1997, and CEO of the residual commercial printing operation, Walton Media, until its sale in 2010.

Randy has volunteered extensively in the printing industry and has accumulated a wealth of knowledge about the industry’s inner workings as well as a large base of contacts within the industry. He has held high-level volunteer positions in the Printing Industries of America, including Chairman of the Board, and he has served on the Boards of the Graphic Arts Show Company and the Graphic Arts Education and Research Foundation. Randy was the 1992 recipient of the PIAG Benjamin Franklin Award and was later inducted into the PIA Ben Franklin Society; he is also a member of the prestigious Soderstrom Society.

In addition to his extensive activities within the printing industry, Randy has also been very active in his local community, including serving as a 20-year member of the board of directors of The National Bank of Walton County and past chairman; past president of the Walton County Chamber of Commerce; past chairman of the Monroe Water, Light & Gas Commission; 37-year member and past president of the Monroe Rotary Club; trustee and chairman of the Walton County Foundation, Inc.; member of the board of advisors of the Georgia Museum of Art at the University of Georgia; trustee and past president of the Northeast Georgia Council, Boy Scouts of America, and recipient of the BSA Silver Beaver Award. And is a deacon in his church. All of this resulted in him being the recipient of the 2009 McGarity Citizenship Award.

In his role at New Direction Partners, Randy is dedicated to bringing buyers and sellers together for profitable transactions that benefit both parties and strengthen the overall industry.

Randy and his wife Jane have two adult children and three grandchildren.